Can vaccines really be the weapon and life saver for the people of Indonesia? Up until now, it’s anybody’s guess.

President  Jokowi’s  first Covid-19 inoculation on January 13, 2021 was the start of a new strategy against the coronavirus pandemic in Indonesia, a very crucial move in overcoming the public health disaster that has been ongoing for almost a year now. The vaccines are expected to become new ammunition that can help Indonesia, and all countries around the world, emerge from the prolonged multidimensional crisis.

With this big hope comes big questions. Can vaccines really be the weapon and life saver for the people of Indonesia? Up until now, it’s anybody’s guess.

Vaccination, on the local and global level, is aimed at achieving herd immunity — the indirect protection that happens when a population is immune either through previous infection or vaccines. In theory, herd immunity can be achieved when 70% of the total population has become immune. To achieve herd immunity on a global level, 5.5 billion people (out of a total of 7.8 billion world population) will need to be vaccinated. That means that 11 billion doses of Covid-19 vaccines would thus be needed. Consider, due to limited capacity, global vaccine production capacity can only deliver a total of 6.2 billion doses per year. This doesn’t even take into account the need for other vaccines such as those for rubella, polio, HPV, and tuberculosis and the time it takes to ramp up production. If we assume that the global capacity for Covid-19 vaccine production is only at half the capacity, vaccinating 5.5 billion people will take 3.5 years.

Amid such limitations, the hunt for a Covid-19 vaccine has become an issue in itself. Inequality may bedevil the process, as the procurement and distribution of Covid-19 vaccine is dominated by high-income countries. Low-and middle-income countries often find it difficult to purchase the vaccines to meet their domestic needs if there is no consensus on fair distribution at the global level. As a matter of fact, political tensions can even occur among the high-income countries themselves. The limited production of Astra-Zeneca vaccines for the EU has caused political tensions between EU, UK and the vaccine manufacturers. Conflicts like this might recur in the coming years if there is no mutual understanding at regional and global levels, either between countries or between countries and the manufacturers. The world places great hopes on vaccines, but it must also recognize all the current limitations. It is difficult to be realistic amid the high demand for vaccines, limited production, and complex distribution.

As is the case with Indonesia. The challenge of vaccination doesn’t end with the efficacy results and the decision to issue an Emergency Use Authorization (EUA), even halal certification. Vaccination involves a much more complex process, starting from production capacity, distribution and storage, training of medical staff, systematic reporting of adverse effects, and acceptance of vaccines in the community.

To achieve the herd immunity by vaccinating 70% of its population, and judging from the rapid rate at which the infection spreads throughout the community, as well as the efficacy of the vaccine used, Indonesia is setting a target for 181 million vaccine recipients. Assuming a wastage rate of 15%, the country needs at least 426 million doses of vaccine.

Health Minister Budi Gunadi Sadikin provided assurance that the need can be met. “To date, we have secured a delivery commitment for around 600 million doses of vaccine,” he said on January 21, 2021. “This has covered 150 per cent of the target.” Currently there are four manufacturers that have collaborated with Indonesia, namely, Sinovac, AstraZeneca, Pfizer-BioNTech, and Novavac.

With such an ambitious target, and under an optimal scenario, it will take Indonesia 15 months to vaccinate 181 million of its population. This assuming that the supply of raw vaccine material from Sinovac will arrive in timely manner, the vaccine production capacity at BioFarma is at an optimal level, there is no delay in delivery from other vaccine manufacturers, and distribution to inoculation runs according to plan. It also means that, on an average, Indonesia will need to vaccinate 2 million of its population every month.

In early January, President Jokowi set a more ambitious target. “It means we have to inject 364 million doses. Hopefully it can be done within a year,” he asserted. With such lofty target, the Covid-19 vaccination program must be able to cover around 15 million people per month. Is this figure realistic?

In the initial effort to vaccinate its health workers, Indonesia still encountered significant hurdles. Of the 1.53 million health workers slated to get vaccinated, 1.5 million (98%) have been registered. However, by the end of January, only 493,000 (32.8%) health workers had received their first dose. (Figure 1)

This optimal scenario demands both extraordinary and realistic effort amidst limited technical capabilities. Administering vaccines to 35,000 people in one day is not impossible, but it definitely requires strategic planning. Jakarta, as the area with the best infrastructure, is planning a mass Covid-19 inoculation at five locations with a capacity of 500-1,000 people per location per day. That means there are a maximum of 5,000 injections per day. Thus, in order to achieve the target of 1 million inoculations for health workers there needs to be at least seven regions with similar capacities that can carry out mass inoculations.

After February, the vaccination program will be expanded to include public servants and members of the armed force/police with an equally ambitious target within 1.5 months. And, at the end of April 2021, the inoculation will be given to all Indonesian citizens aged 19-59 years without comorbidity. 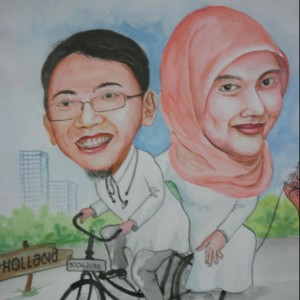 The global community is facing a considerable challenge to eliminate tuberculosis (TB). Although the global TB

Good Knowledge but Poor Practice Toward COVID-19 Among Indonesian Youth

Targeted vaccine allocation could increase the covid-19 vaccine benefits amidst its lack of availability: A mathematical modeling study in indonesia

With a limited number of vaccines and healthcare capacity shortages, particularly in low-and middle-income countries, vaccination